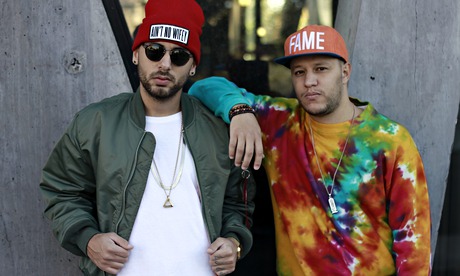 If 2013 saw Daft Punk usher French dance music down a cosy dad-disco cul-de-sac, 2014 looks set to be the year when a fresh gang of DJs and club kids hijack the French house scene and bundle it back to the banlieue. Producers Amine Edge & DANCE (they won’t give their real names) are leading the charge, with a sound they’ve dubbed gangsta house, or G-house for those too laconic/stoned/Gallic to bother with the extra syllables.

The name was originally coined as a joke; the Marseille-based duo are hip-hop obsessives who learned English by rewinding Biggie records, and inevitably “gangsta” is their favourite term of approval. The genre title has stuck, largely because it does a neat job of summing up the mix of hardcore rap samples, booty-wiggling bass and chugging dance beats with which the pair are wooing clubland.

Along with contemporaries on the ClekClekBoom label, Amine Edge & DANCE are part of a new generation of French producers applying the murky semantics of gangsta rap to house music. The result is a contemporary update of that briefly fashionable late-80s genre, hip-house, although DANCE is quick to point out that “a track without a hip-hop vocal can be G-House too, as long as it’s got a sick bassline. It’s all about that screwface you do when the bassline is coming.”

The duo’s breakthrough came with Halfway Crooks, a juddering banger that sampled rhymes from Mobb Deep’s ‘hood classic Shook Ones, the vocals looped into a nihilistic party chant. DANCE’s role is to source these hip-hop samples, and despite the pair’s increasing profile he’s in no great hurry to collaborate with any current stars. “I think I’ll always use samples because you can sample Biggie, and nobody can rap like him. Although I would love to work with R Kelly.”

Last month, Amine Edge & DANCE sold out London’s 3,000-capacity Building Six in a matter of days. Their next UK gig, at Great Suffolk Street Warehouse on 5 Apr, is about to follow suit, and they’ve just scored a weekly residency at Sankeys, Ibiza. Amine feels his sudden success here is no more than he deserves. “I remember when I used to live in London in 2006 and went to every club with my demo and no one gave a shit about me. My demo was dope, by the way! Now we sell out clubs for thousands of people and refuse 50 gigs a week, it’s crazy.”

As for the aforementioned Daft Punk, the duo are respectful – to a degree. “Homework is one of my favourite albums of all time,” Amine insists. “They’re my heritage. But after Homework, I didn’t really like them…”

“You can’t compare Daft Punk to anyone.” DANCE adds “But now the media have to know that there is another sick French duo, Amine Edge & DANCE, without the masks but with the same ambition.”

Read the original in the Guardian here